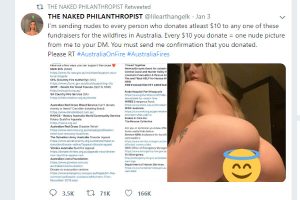 Never let anyone tell you that online sex work does more harm than good. Firefighters, aid organizations, and koalas in Australia beg to differ.

As Australian wildfires continued to burn out of control last week and millions watched in helpless horror, one sex worker decided she was going to do something about it. On the evening of Friday, January 3, the LA-based model Social media influencer and OnlyFans model Kaylen Ward tweeted to her 100K+ Twitter followers: “I’m sending nudes to every person who donates atleast [sic] $10 to any one of these fundraisers for the wildfires in Australia. Every $10 you donate = one nude picture from me to your DM. You must send me confirmation that you donated.”

Within minutes, reported Buzzfeed, “The tweet took off, with more than 40,000 retweets, and Ward’s inbox was soon flooded.” By the end of the day on Saturday, she tweeted that she’d raised $60K, and she’d renamed herself “The Naked Philanthropist” on Twitter.

“I did not expect this to blow up the way it did and I was not prepared to answer 20,000 + DMs,” she tweeted on Sunday morning. By midday on January 5, she’d an astonishing half million dollars.

She’s hired a support staff to keep up with the flood of DMs she’s receiving, each of which holds evidence of a Twitter user’s donation to one of a list of charities she specified. One person, she tweeted, donated $5,000—so, true to her word, Unilad reported, she sent 50 pics and videos.

We have hit and estimated $500k…… guys I am crying…. this is fucking crazy

Her naked fund-raising efforts have gotten her booted from Instagram. RuinMyWeek.com wrote, “Sadly, asking for nudes on IG is a big no-no. Especially for money, so Kayla’s IG is no more.”

“My IG got deactivated, my family disowned me, and the guy I like won’t talk to me all because of that tweet. But f*ck it, save the koalas,” Ward tweeted.

But the response from other quarters has been overwhelmingly positive, with media outlets picking up the story, social media users thanking her for using her influence to help the world, and the DMs continuing to flood in.

So far, the fires have killed two dozen people, damaged over 1,500 homes, destroyed more than three and a half million hectares of land, and killed an estimated half billion wild animals. But, with all the cash Kaylen’s DMs represent going to help fight the fires, maybe Australia has a chance, after all. Never underestimate the power of nudes.

My IG got deactivated, my family disowned me, and the guy I like won’t talk to me all because of that tweet. But fuck it, save the koalas.

‘Do It On a Bunny,’ Jacq the Stripper Count Down 2019’s Best Sex-Positive Pop Culture Moments 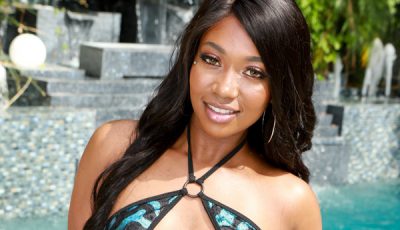 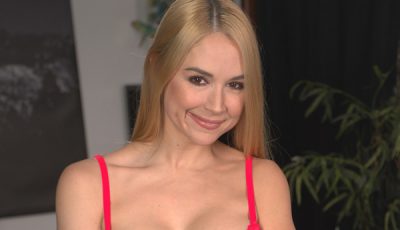 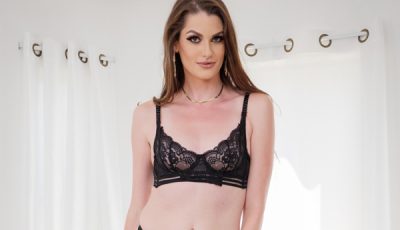