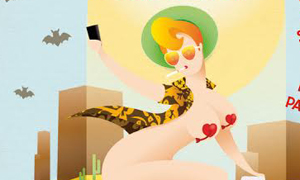 Las Vegas, NV – The Erotic Heritage Museum of Las Vegas will host the 2017 World Naked Bide Ride Rally on June 24th, at 3275 Sammy Davis Jr. Drive. A global event held to, fight the world’s dependence on fossil fuels, body shaming, and patriarchy, the WNBR has been in existence since the start of this century. Riders, as ‘bare as they dare’ take to the streets on their bicycles, skateboards, or any other form of human-powered transportation to celebrate human-powered locomotion with the wind whipping through their hair…and just about whipping everywhere else. Due to the Las Vegas heat, the museum will be hosting indoor activities including a craft table, body painting, and more, beginning at 6, with the actual bike ride starting at 9 pm.

As the museum’s director Dr. Victoria Hartmann says: “For the second year in a row, The Erotic Heritage Museum is thrilled to support with Las Vegas World Naked Bike Ride, alongside other fabulous sponsors. As a longtime Las Vegas institution, part of our mission is to advocate for sex positive culture. We find it ironic that one of the most sexualized cities in the U.S.-Las Vegas-criminalizes non-sexual nudity. We hope by continuing to sponsor movements such as the World Naked Bike Ride, we will bring attention to these hypocrisies and help to change the laws in Clark County, bringing them in line with other cities like Chicago, Portland, and New York. We believe nudity as a form of protest should be a 1st amendment issue and thus a form of protected free speech.”

Crank and Grind has agreed to support riders before and during the WNBR. Minor bike repairs will be provided by small donations and Bad Ass Coffee, and Hot Diggity Dog are keeping the riders fueled and ready for action. Free water will be available to everyone.

“We’ve held bike rides in some amazing cities, but riding through Las Vegas, and starting off at the EHM, brings a new level of support and awareness to our event,” Reverent Phil, WNBR organizer says. “This city promotes hypersexuality, but makes a taboo of individuals reclaiming their right just to exist as they were born. By being naked, we help address body shaming and highlight the vulnerability of cyclists on the road. Motorists will say, “don’t him them, they’re naked!” as if a thin piece of cotton would offer any protection against a ton of steel going 40 mph. Interestingly enough, I’ve never heard a motorist say, “I didn’t see em” when talking about a naked biker.”

ReBAR is hosting the official WNBR afterparty (pasties required) and will be giving a free beer to anyone on the ride. Bike Smut is providing technical support and coordinating entertainment, including a set by Fans of Jimmy Century as well as some special guest appearances and a pool to cool off after the hot ride.